When it comes to health care costs the news is rarely good. Most headlines only reinforce what we already know – that costs are spiraling out of control and no end is in sight. On that rare occasion when the news appears to be good, it’s all too common to see it tempered with countervailing data or some other sobering statistic.

Such was the case last week when Towers Watson and the National Business Group on Health released the results of their 14th annual employer survey. In what many considered a positive sign, the survey showed that health cost increases for U.S. employers fell in 2013 to a 15-year low of 4.1 percent.

Yes, you read that correctly – we said “fell.”

In the context of health care costs, that would seem to be a cork-popping moment, especially for large self-insured employers who have grown accustomed to annual cost increases north of 8 percent.

But before HR directors everywhere could breathe a sigh of relief, Towers Watson’s senior health care consultant, Ron Fontanetta, sobered things up a bit. Four percent sounds good, Fontanetta said, until you compare it to the rate of inflation for the U.S. as a whole, which last year was an anemic-sounding 1.6 percent.

In other words, despite hitting a 15-year low, that 4.1% stat turns out to be 2x the rate of inflation. Not exactly the big win many of us have been hoping for.

What does that mean for 2014 – and beyond?  Only time will tell, but the Towers Watson/NBGH survey found that costs on average are expected to be $9,560 per employee this year, which is another 4.4% increase over 2013. 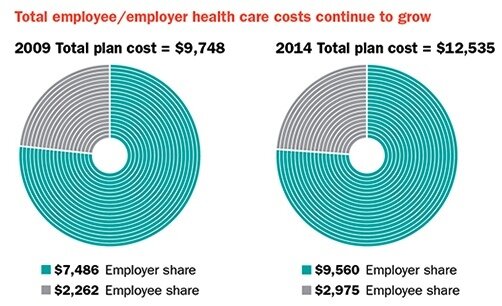 And since most employers continue to cost shift, the news for most employees isn’t really good at all.

A less optimistic study released in the fall of 2013 by the benefits consulting firm, Aon Hewitt (AON), shows average insurance premiums for workers will rise as much as 10 percent in 2014.  On top of that, employees are expected to see an additional 10 percent increase in their out-of-pockets costs, to $2,470.

As AON points out in a statement accompanying its new report, “These projections mean that over the last decade, employees’ share of health care costs – including employee contributions and out-of-pocket costs – will have increased almost 150 percent from $2,011 in 2004 to $4,969 in 2014. At the end of the day, employees now pay over $100 more each month for health care than they did just three years ago.

For employers and employees alike, this hit to the bottom line hurts.  It also raises the stakes for companies like ours that are working to help employers reduce their health care costs in part by helping their employees get healthier.   It’s not enough to deploy new technologies and hope the rest takes care of itself. Reducing the rate of growth in employer health care spending may be an encouraging sign, but only up to a point.  If we can’t do more to reduce costs for employers and employees alike – and do so while helping to improve health outcomes, then even the best-sounding news will land with a thud.